Dragon Actually by G. A. Aiken 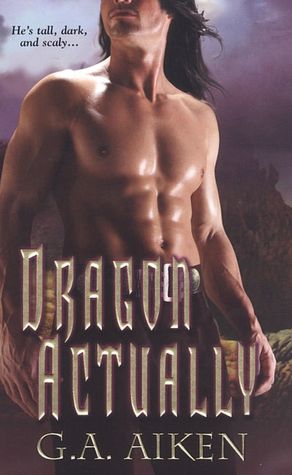 For the next bonus book, I suffered through Dragon Actually, by G.A. Why did it take me sooo long to pick up this series? It doesn't make much sense that even Ivankov Dragon's right hand didn't know about Luffy, but others like VP and Kuma did(Possibly because Ivan was in Impel Down for like 10 years). The what if's started and before long I was researching everything dragon. As an April Fool's joke it was pretty amazing; all neon lights, synthesised music and cheap special effects. I almost didn't finish it, and I probably wouldn't have missed much. Kuunavang, the Canthan dragon, wasn't so bad either; once cleansed of her affliction, Kuunavang aided heroes in their fight against Shiro. Not only that, the glaucus atlanticus actually absorbs the man o' wars venom and stores it in the tips of the finger-like appendages on either side of its body to use when preying on other fish. Luckily, this was a nice dragon who was the guardian of the town she ruled over. The whole thing actually feels a bit like when I finished Dragon Age: II; it left me thinking, “That's really it, isn't it.” So… I don't really know how to advise you, dear reader. It was a good jape, and for a moment I was almost fooled. Which brings me to Rogue Dragon, the spark actually came from a children's book my son borrowed from his schools library. After all knights need to have a clear view of impending dragon attacks… (Unless of course you're closest friends are actually dragons!). Oily man-chest on the cover did not make up for ANYTHING.